Welcome to where we keep the annual #TheBitchList

while the creator concentrates on her own writing

are having their scripts directed by Dee Rees & more

The Bitch List makes winners with meetings and deals all over town: 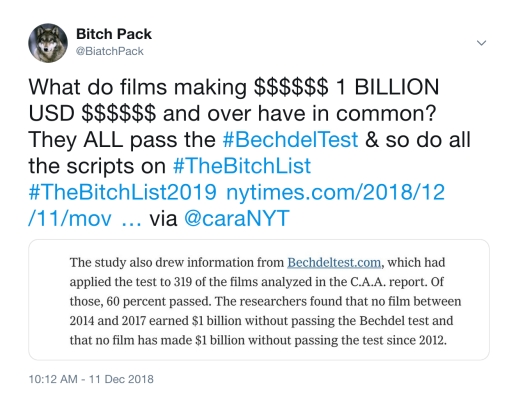 Entertainment professionals send nominations that they have read. Check here and @biatchpack on Twitter to find out the voting period in December each year.

Each nominated story (teleplay or feature screenplay) will get 1 point

This year’s & all future years’ twist: If the story being nominated also passes any of “The New Bechdel Tests” (ie. The Duvernay Test or The Waithe Test), it will get 2 points

The TOP 5 point earners will receive the latest Final Draft 11 software for free!

– This list is run by one human being who counts these nominations & keeps things in order. Do not send the scripts themselves (no attachments please)

– This human is not here to perform free labor for you- ie. be told what to tweet and when, to be your personal PR machine or to be your literary rep

HERE ARE THE INSTRUCTIONS:

HOW TO DO IT if you are an entertainment industry professional:

– You can nominate feature length scripts or teleplays

– Please send nominations to biatchpack@gmail.com, in this format:

Status: (available or not)

– Do not send a list of more than 3 nominations

Each nominated story (teleplay or feature screenplay) will get 1 point

We are committed to helping an array of writers tell their tales faster and more easily.

Remember- votes are still subjective, so if you do not make this list, it doesn’t mean you’re a bad writer.

Thank you for participating, so we can all know what scripts are out there that will further our society and which reps/agencies/management companies are actually into real change and not just maintaining the status quo.

Thank you to our sponsor, Final Draft screenwriting software

This list is of the entertainment industry’s best liked Bechdel Test passing scripts.

The test is a very low bar to pass where:

This list is here to encourage more inclusive story-telling and better dialogue on the page and in real life.

For more information about The Bitch Pack, please go here

Every year there are think pieces about which awards season films pass The Bechdel Test, ala this one in The New Yorker.

Hosted a table talk at #FiForum19

Thank you to #VAFF, British Columbia, The City of Vancouver, Canada for funding such a cool poster for a film project about the music industry and Vietnamese-American & Chinese-American women characters! VAFF dubbed “Topie” is originally a produced short film called TRV CVLT So, who likes quality, equality + money?

Which #WOC + #BlackWomen lead stories are you greenlighting then?